Solo Game Dev Kanban Magic: I used to struggle with self-management, but my most recent technique seems to be working really well

Over the last month I've been experimenting with an "agile" time-management method for my solo-game dev work. The verdict? Works like a charm!

Recently, I switched from a full-time web dev position to being a full-time solo game dev. Now, this isn't my first time doing solo projects full-time, and I know that my biggest enemy to productivity is often myself, so I wanted to be absolutely sure that I use my time to 100% capacity.

In my "day jobs", I've noticed I could churn out features and code at a pretty steady rate. This had to do with, 1. the fact that other people relied on me kept me motivated, 2. certain tasks were taken care of by others, so all I needed to do was focus on implementing technical specs, and 3. I worked with a "professional detachment" from the project.

I roll my eyes at agile-whatever as much as the next guy, but, still, I needed something of that bureaucracy to keep me going. I've tried a variety of online task trackers that worked for other people, but for whatever reason, none of those clicked. After a month of using my kanban technique, I think it's safe to say this one did click.

My Kanban board is posted on the wall in front of my desk. I use index cards cut in half as "tickets". The columns are Icebox, Backlog, Sprint, In Progress, and Done. The In Progress area isn't visible in this photo, but that's because I move In Progress tickets down to a separate spot so they can be in front of me as I work on them. The color coding lets me split based on project and/or ticket type.

The method I came up with, click-baity titles aside, is just a slew of garden-variety agile concepts adapted for my needs as a solo game dev. The rules:

This worked for me. Maybe with some personalization, there could be something helpful in here for you!

How to do it 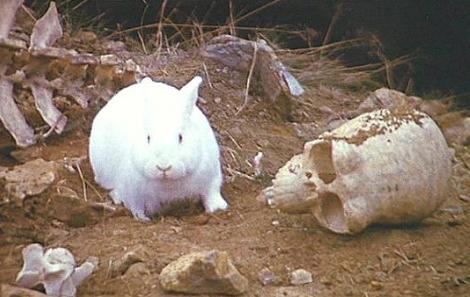 Generally speaking, my previous work, was, well, "work". It was something I wanted to get over with. Now I am doing something I actually like doing. At my previous "day jobs" I was much more likely to put in minimal effort to meet the technical specifications of the task at hand. While putting passion into your game is vital, the bigger risk for me (and I suspect for most) is too much passion: having fun, but ending up wasting precious time while not getting tangibly closer to releasing.

Writers call these plot bunnies -- pesky ideas that you feel compelled to write, but ultimately multiply out of control. This is very applicable to game writing: You don't need to spend hours drawing a really cool sprite for an enemy that's likely to be cut anyway, but the temptation is strong.

Lesson learned: Stay focused on daily deliverables. "Cool stuff" (plot bunnies) gets put in the icebox. If I commit to 8-12 points a day, I need to get 8-12 points done that day.

To thine ownself be a jerk

During the development stage, you don't have anyone to be mean to you. Remember: Your potential players won't be nice to you. They'll (rightly) expect a full game and for you to deliver within the time you have.

When working with others in my "day job", I had people that depended on me to do my job. There was this subtle on-going social pressure to do what I had to do. When working by myself, the social pressure is distant or abstract: Even if you live hand-to-mouth as a game dev, this isn't influenced by day-to-day development. Instead there's a "delay" of even years before you get that social pressure to deliver. The flip-side can be equally problematic: You get no "job well done" or pat on the back for every day's little accomplishments.

Lesson learned: Use paper ("dead trees") for everything. I keep the kanban board right in front of my desk, judging me. I take my job seriously. If I don't complete enough I need to feel guilty like I let somebody down (myself, future players). If I get my stuff done, I need to feel good, satisfied and rewarded: I did my job today, time to kick back and recharge my mental batteries.

The Valve method: Lots of hats

Valve Software is known for unusual management hierarchy. They are also known for making games with lots of hats. For solo game devs, the second thing is the more important.

In a traditional software shop as a developer, I can rely on product managers to create technical specifications, testers to ensure what I wrote matched those specifications, design to hand me pretty mock-ups, and marketing to produce text and content. All these relationships have some degree of cooperation and also "friendly antagonism" between them. Most importantly, each team can focus on doing their job, and assume the other will get their part done. Design didn't have to think about how I made things pretty, they just needed to define what "pretty" was. Product managers didn't need to know the internals of the new feature, just what was generally easy and hard, and from that, triage ranked priorities for what to do next.

I'm a solo dev now, so I gotta be everything. I gotta wear all of the hats. But in order to be as productive as I was, I need to self-police about only wearing one hat at a time. While I'm thinking about what's pretty, I can't worry about how I'll implement it. While I'm thinking about specifications of my game-play or game-engine, I can't worry about how I'll test it. I just need to do each job as well as I can and figure out how to make the ends-meet in the end, otherwise I'll be overwhelmed.

Lesson learned: Each ticket I create is of a certain "role". Many are development, but others might be art, or web-site work. If I'm not sure what I want to do next, I create both a "design" ticket and an "implement" ticket. For the first, I sit down in front of a piece of paper away from the computer and brainstorm a specification. I give myself a good chunk of time for this, at least 1-3 hours. I resist the urge to think about implementation: this is a contract with myself, I'll worry about implementation after. I have separate time allotted for both.

I've tried it for about a month, and consistently delivered ~40 points a week, which was my goal. I feel quantitatively more able to create deliverable products than I have with personal projects in the past. Will it continue to work? I think so, I hope so, and I'll keep you guys informed!

Have you tried this or something similar? How did it go? What project management techniques work for you? Let me know in the comment section!

Game development on Linux: Using Linux at every step of the process

Want to write games on Linux? I do! Here's how to hit the ground running. This post is a…

Michael Bethencourt (@mbgamedev) is a developer based in the SF Bay Area. He blogs about indie game development on his OS of choice, Linux.

I founded a cutting-edge coding academy. If you live in the San Francisco Bay Area, you can learn to code full-stack web development in Python and React.js, by taking one of my affordable, intensive courses.

Want to keep up with my tutorials, code snippets, and random musings on Linux game development? I post 2-4 times per month, so subscribe to catch 'em all!